Bring on the Maids! The New Year holidays are drawing to a close. The time has come for those friends who gathered from London and across the rest of Japan to file homeward out of Tokyo. It therefore seemed like a natural point to go on an excursion that I and a few of my friends had wanted to take whilst in Tokyo. Bring on… the maids.

This is one adventure that might never have taken place had I not the excuse of friends who wanted to go to a maid café. Simply going to Akihabara, Tokyo’s famous ‘geek town’ can be quite a grueling experience. Perhaps more so then anywhere else in Tokyo, here runs an ugly undercurrent of anti-social tendencies, loneliness and misdirected sexuality. And remember, this is coming from someone who owns a topless cartoon figurine… 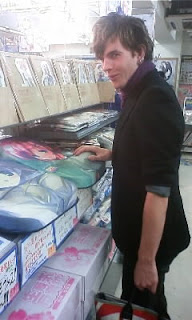 Still something seems wrong with Akihabara. The various anime themed department stores in the area sell a mind boggling range of tat, some of which have some pretty disturbing implications. Take the giant body shaped pillow, with a female anime character printed on it, clearly intended for cuddling at night in substitution for human warmth. Similarly-themed are the 'breast pillows' - modeled charmingly here by a fellow student.

Yes dear reader, shake the disbelief from your eyes, for you read correctly. Akihabara is a little on the wrong side of sexual frustration and poorly disguised innuendo, even for ME.

Nevertheless, we the intrepid chosen, found ourselves stumbling off the tube into the lazy Sunday afternoon sun, into a mecca of maids handing out leaflets, girls in bizarre anime-influenced costumes singing home made J-pop, and electrical shop attendants rapping, yes RAPPING about their household wares.

And almost immediately the tone was soured. While the 'premium' type of maid, who I will discuss in detail in a minute, is well protected in the unassailable and well ventilated ivory towers so quaintly given the moniker 'cafe', things are not so easy on the mean streets. There are those who do not make it to the dizzy heights of the maid cafe, yet soldier on valiantly observing their right to dress as cats/french maids/any twisted sexual fantasy you might care to mention. These girls (perhaps they are merely too young to be allowed to work in a maid cafe) are forced to perform in their unadorned natural habitat: in front of the zoom lenses of a lot of dirty old men's cameras. The right and natural place for young girls not yet of an age eligible for work in a respectable establishment. Tough but fair. 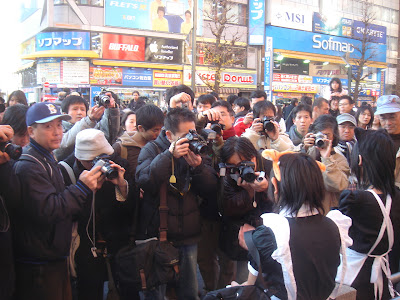 How surprised I was then, when the time came to see the real thing in action. The cafe that we had decided on was called the "@home cafe", and was situated confusingly on the fifth floor of the Akihabira Don Quixote, a famous variety store. We got lost on the first floor and decided to ask someone how the hell you were supposed to scale the legendary heights of the claustrophobic, neon-dripping shop. And who better to ask then the pair in maid outfits, who are clearly on a coffee break, laughing and chatting as they sit casually on a desk by the descending escalator. Shouldn't they be cleaning something? Never mind, I am fairly certain they will be cowed by my manly presence back into maid-mode. I propel myself over, injecting just a little swagger into my walk.
"Excuse me," I clear my throat, "you wouldn't happen to work at the maid cafe in this building?" The carefree smiles do not disappear. I think one of them sniggers.
"Yeah, fifth floor" the closest girl meets my gaze with an indifferent smile. It is the amused and healthily self-confident smile of a normal young woman.
"Yes, well I was wandering if you could tell me how we get up to the fifth floor from here. Please."
"Over there on the left." With this she turns back to the other girl, who is swinging her legs and laughing into her coffee.

And so I limped back to my friends.

I am not sure I can pinpoint the exact moment. Perhaps it was not a moment at all, and was simply a slow shift in my awareness, like the movement of tectonic plates, that has continued to create the landscape that I aim to relate as I sit down to write. Either way, the fact of the matter is, I had a bit of a revelation. These girls are like fucking rock stars.

You see, they write pop songs under the name 完全メイド宣言 (Perfect Maid Declaration), including the one in the video above. This video and others like it are blasted out of TV sets positioned on the walls of the cafe. The most popular maids become minor celebrities in their own right. The no photography rule (yes, I am ashamed to say that for the photos of the maids, I went a-stalking on the cafe's website and got a little liberal with copyright law) is not merely in place to force you into buying a photo opportunity with the maids, but to stop a hellish free-for-all photo-apocalypse that would surely make the gentlemen snappers on the street outside look like small fry.

This is the nature of the maid cafe. In a particularly Japanese way, the maids exist in a no-man's-land in between innocent 'cuteness', and implied sexuality. In the same way that mp3 download sites sometimes warn you that it is illegal to download mp3s except as backup for cds you already own, the maids are masterfully efficient in never displaying any open sexuality. Those mp3s are just there for boring old backup purposes. If you can think of something more interesting to do with an mp3 site, that is your business. So the maids are not about violent and sexually inspired subjugation of the female sex. Just like I definitely did not imagine they might be. I was thus spared the discomfort and emasculation of being more feminist than the maids. Also, I was relieved to find things did not go the other way; they were not threatening or overpowering. Just like a with proper rock star, power and respect does not necessarily lead to arrogance. All professional entertainers alike, have a responsibility to entertain. Professionally. The maids simpered and smiled with a professional almost to the point of clinical impunity.

When a maid kneels at your table and stirs your coffee, it is not really about a dominator and a dominated. It is a performer putting on a show for an audience; it seemed clear that our embarrassment was by no means reciprocated. After a well-rehearsed routine wherein she bade us to make heart shapes with our hands and cast a spell on our coffee "to make it more delicious" our maid swooped away, leaving us with our bemused smirks. One of my friends was twice tricked into looking like a big girl. Once when ordering a cake as it was written in the menu, he found himself asking for a "widdle-bear-cake", and again when a maid was pouring sugar-syrup into his drink; she instructed him to say "Nyaa!" when she had poured in enough. Basically, he used the Japanese onomatopoeia for the mewl of a kitten. That was probably the most entertaining aspect of the trip.

We drained our coffees and played with the overly sweet, creme-draped cakes that we had ordered. Shuffling though the gift shop, it seemed wise to steer clear of the large towel decorated with an almost life sized photo of one of the maids and the box of traditional Japanese sweets similarly plastered with maid photos. These where obviously intended for the pudgy young men who turned up alone decorated with @home cafe badges and the old men who also turned up alone, decorated only with enormous grins. Watching those people sitting lonely at their tables for lunch, cracking smiles only on receiving the squeaky attentions of one of the maids, had been a little saddening. However, it was part of the dynamic that made going to the cafe such a guilt-free experience. We all walked away clearly understanding who was being payed abnormally well for working in a cafe, and who was paying through the nose for a very ordinary cup of coffee. Although those customers presented fairly tragic figures, there were plenty of more normal-looking human beings present, and we left feeling relieved that we were amongst those who had just gone for a bit of mild entertainment, and not out of any debilitating fixation for those eternally nonthreatening young girls, and their frilly outfits. And their big swishy skirts. And those crazy little pink tie things. And those wide almost inviting eyes... Ps. Because you definitely can not buy it in England, I don't think it is immoral to tell you the location of the 完全メイド宣言 song Maiding Story.mp3
Posted by Oliver at 16:57 2 comments: